What Makes You Not a Libertarian?

As the Libertarian National Convention prepares to happen in about a week in Orlando, Florida there are many people who have taken to Facebook and Twitter to debate the merits of what it means to be a Libertarian.  Like any political party there are going to be purists that think candidates who run under the banner of their party should adhere to 100% of the beliefs they feel make them to be a Libertarian.  There are the in between’s and then there are always the moderates in the Party.

Many claim that certain candidates for the Libertarian nomination for President are not “real Libertarians.” Is that a fair statement? Or is that radicals in the party trying to destroy the chance the party has in the 2016 election?

First lets take this into consideration. What is the definition of Libertarianism?

Libertarianism (Latin: liber, “free”) is a political philosophy that upholds liberty as its principal objective. Libertarians seek to maximize autonomy and freedom of choice, emphasizing political freedom, voluntary association, and the primacy of individual judgment.

Yes that is the definition from Wikipedia, but it is correct. That definition provides a broad stroke to the principle behind the meaning of libertarianism.  So the question should be do the current candidates for the Libertarian nomination for President fall into that definition? I would suggest the answer is yes.  Everyone running for President as a Libertarian right now falls into this broad definition.  If you read their platforms and listen to them speak they all basically meet the requirement to different degrees.

Now, the question around social media centers around what makes you not a Libertarian? There are some who want a pure, 100% Libertarian. Here is a visual to represent this thinking: 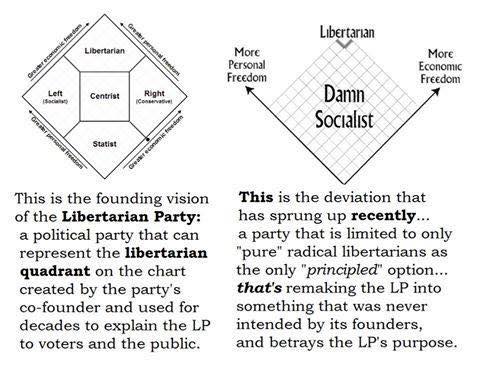 Everyone in the party right now running for President would fit into the quadrant on the left.  However, the purists want somebody to fit into that tiny little box on the right towards the top. Is that really practical?

All of them have issues! Yes Gary Johnson has fumbled on the free association issue when it comes to who has to bake somebody a cake.  Austin Petersen goes against the majority of the party when he claims he is pro-life in regards to abortion.  They all have something that doesn’t meet the requirement of a Libertarian that is 100% Libertarian. That doesn’t disqualify them as a Libertarian, nor hinder their ability to run for President.

According to this picture then I am disqualified to run for President because I am not 100%.

The question on the mind of the party and the delegates is what candidate can be the face of Libertarianism and spread the message of Liberty across this country? Who has the ability to take on the powerful two party establishment and has the necessary experience to lead our party to victory and grow us into a powerful entity?

This pettiness on social media arguing who is and isn’t a real Libertarian doesn’t do anything to advance our cause.

One thought on “What Makes You Not a Libertarian?”

[…] inexcusable stuff right there! We know that not everyone is a true Libertarian (we did that story yesterday), but there is a point that makes you not a Libertarian, and that seems like that […]