Skip to content
HomeNevermind Fake News, We Have a Fake President

Itâ€™s been roughly 3 weeks since Donald Trump was inaugurated as the 45th President of the United States. This site faced criticism for not giving the guy a chance to do something as President, and we have waited long enough. Donald Trump is the pure definition of a shyster and many Americans are still falling for his clown show.

Donald Trump talks about fake news a lot. Granted, there are times that I get frustrated with the news coverage on certain events or political moments, but never have I doubted that the intentions of our news outlets are to report the news and give the most informed analysis of the situations that we face as a country. This goes from The New York Times to CNN, to Fox News, and even news blogs running around the internet.

The problem is not fake news, the problem is we have a fake president that is swindling the American people. Just take this recent tweet from President Trump: 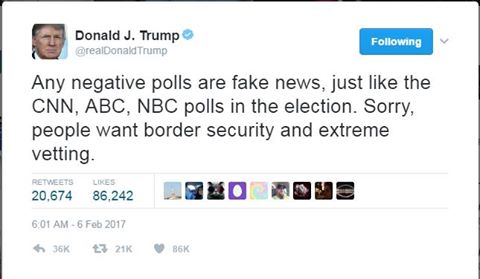 So, even if there is a consensus among polling agencies that give him poor approval ratings, or question his actions on certain issues it is somehow fake news? This guy lives in a parallel universe where he has a 100% approval rating and everything he does is exactly what the American people are wishing for.

This man is perpetuating a fraud against the American people and it is time that we all start realizing this. He is tarnishing the reputation of the office in which he sits. His legitimacy as President goes down with every god awful tweet he sends out. His ability to govern is going out the window every day.

Yes, this is a harsh analysis and there will be people that give me a hard time for it. However, I am a Libertarian and I believe in the concepts of freedom and liberty. Every day that I watch or read the news I have fear for the future of this country and our precious rights. Donald Trump is a threat to my safety and security which is one of the biggest responsibilities of government.