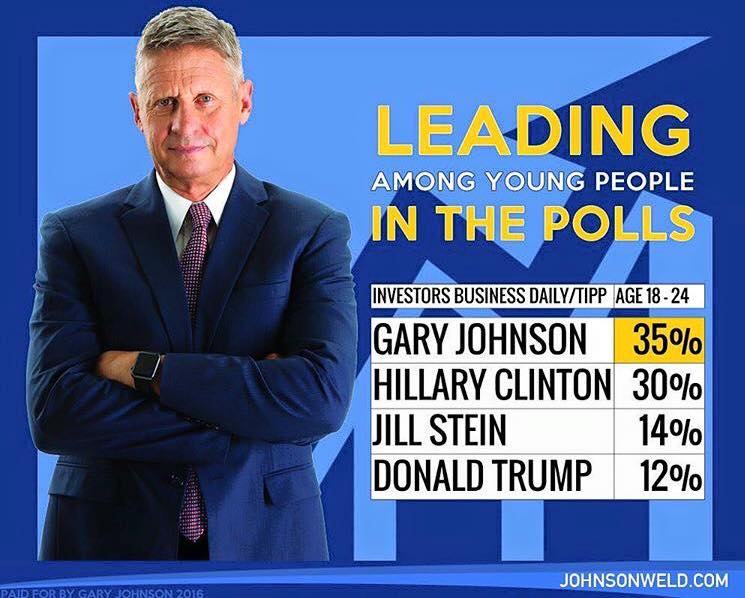 A Recent poll revealed that presidential candidate Gary Johnson is polling number one among millennials between the ages of 18 and 24. As the youth begins to understand that throughout history the only cases of improvements in social freedoms, have occurred under the conditions of economic freedom. The more economically free a country is, the more socially free they will be. Freedom to spend your money the way you choose is a fundamental right. No person should ever be forced by the threat of a government gun to contribute involuntarily to something they feel is immoral. Why should Americans be coerced with the threat of imprisonment to fund Wars they inherently disagree with. Our tax dollars should not contribute to bombing other countries without our consent. The millennials that are now voting age have lived in a political atmosphere of endless War. I think this has drawn them to libertarianism because of our non-interventionist foreign policy.

On social issues, the Libertarian party was the first party to have a platform of marriage equality. We’re the only party in favor of marijuana legalization and ending the racist drug war, that disproportionately affect minorities and the lower class. We are the only party advocating Criminal Justice Reform and getting rid of mandatory minimums for victimless crimes. The youth finds this very appealing. Libertarians are the only ones advocating a genuine approach to balancing the national budget. Every citizen in this country represents $59,929 in debt. Do we expect millennials to pay for the reckless spending of past generations? Should the federal government be allowed to spend beyond its means?

A radical shift in public thinking is upon us. People are beginning to realize that government is coercion and nobody wants to be subjugated or forced to abide by laws they disagree with. We are the only movement in America today that doesn’t arrogantly assume we know a better way for other people to live their lives. Libertarianism is the only political philosophy that doesn’t ask the government to enforce our morals on other people. As more Americans are exposed to the Libertarian party the seeds of Liberty and freedom will flourish.