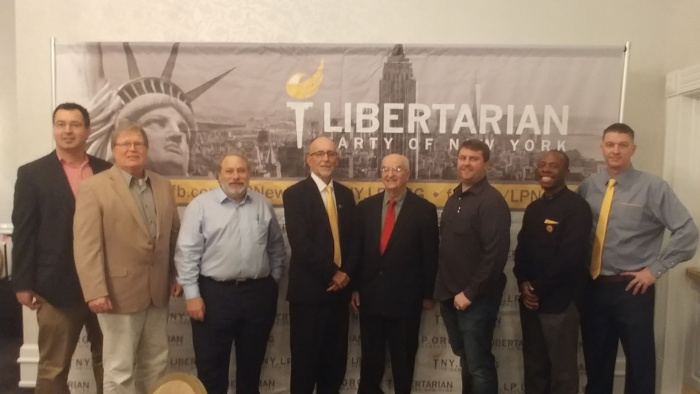 The Libertarian Party of New York held its 45th annual convention on April 29, 2017. During the convention, the LPNY passed a resolution supporting the restoration of voting rights for American citizens convicted of crimes. (The entire resolution can be viewed here)

Currently, Forty-eight states restrict voting rights for convicts. Only the citizens of Maine and Vermont experience no voting constraints based on criminal convictions, even while imprisoned. In the state of New York, you are stripped of your quintessential right to vote while incarcerated or on parole. Those rights are returned after completion of aforementioned restrictions. Nineteen states have laws on the books that restrain citizens on probation from voting, and ten states revoke citizens voting rights for simple misdemeanor convictions.

Not only are these “laws” draconian in nature they are a direct contradiction with the fundamental understanding that all rights come from our humanity and is every American citizen’s birthright. Rights should not be subject to a legislative or bureaucratic rule. If rights come from our humanity or our creator than it is morally presumptuous to think that one man or a group of men can infringe on the rights of any American citizen.

In 1974 the United States Supreme Court ruled in Richardson v. Ramirez that states have a right to disenfranchise citizens with felony convictions, overturning the previous decision by the California Supreme Court. That decision has sent the American electorate down a very slippery slope that has disproportionately affected the poor, and racial minorities right to vote. With the largest prison population in the entire world, America has more citizens than any other westernized country with no voting eligibility. With the passing of this resolution, the Libertarian Party of New York is beseeching all state legislatures to reinstate voting rights to all those convicted of crimes.

LPNY Chairman Mark E. Glogowski commented on the passing of the resolution by stating “I am proud that our membership has demonstrated that we are truly a party of principle who will lead the way in fighting for our rights as citizens of the United States. Now it is time for our party to step forward and to do what is necessary to make this resolution a reality.”