Flipping through Twitter the other day, I came across a tweet from Parkland, Florida survivor, Kyle Kashuv. It was a tweet to let people know that there were other suvivors from the February 14th mass shooting that, like him, identified with those that stood up for the 2nd Amendment and the rights of law abiding citizens. It was inspiring to hear of a youngster with such convictions (and I had nothing better to do) so I clicked on the link and went to this young woman’s Twitter profile. In her pinned tweets was the story of her experience that horrific day. It was heart wrenching. Her name is Sarah Stricker and her message is simple.

I survived the Douglas shooting, I’m alive, and I made it, and so will you. Douglas strong. (from her Twitter @SarahStricker) 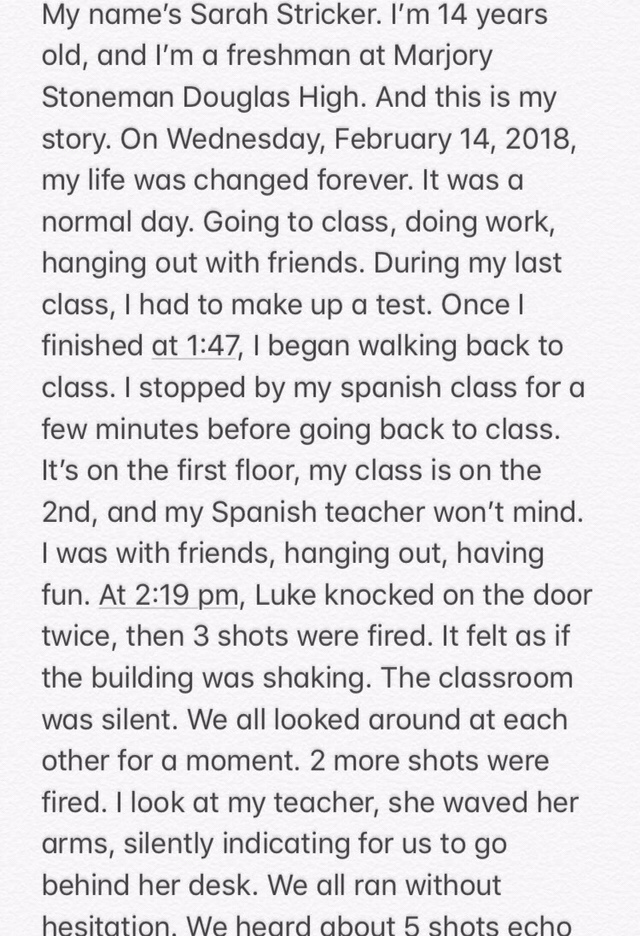 Reading her six page story, I was in awe of this amazing young lady. Only 14 years old, and she had the presence of mind to keep her head together and stay calm (or at least as calm as one could be in such a situation) while a madman was gunning down high school kids. To stay focused and keep the kid next to you from having a mental breakdown as you walk past a pool of your peers blood. To stay focused on the commands of the law enforcement and help that same student out the of the building so she could have the cathartic breakdown that Miss Stricker was denying herself. I knew at that very moment that the tough country boys and farmers that made up my upbringing had NOTHING on the courage of this young woman.

And while her story made a tear fall from my eye, what is more sad (and pathetic) is the lack of coverage survivors like Sarah Stricker and Kyle Kashuv continue to get in the weeks since the tragic events that took 17 lives. Kyle’s own story is one of being shuffled off by mainstream news media because his take was different than that of most of the survivors. While attempting to reach across the aisle, these two remarkable free-thinkers of the next generation are desperately trying to end the hysteria from one end of the debate only to have that same hysteria manifest in the form of a slammed door in their faces.

Not invited to debates.

Not invited to national television broadcasts with other survivors.

Tweets not shared by anyone other than ardent 2nd Amendment supporters.

As I’ve stated before, I am well aware that media companies are private entities and that the media is their product to sell however they wish. If that comes in the form of letting some media out there, while restricting others, so be it. But let us not kid ourselves that this sends a very clear message to anyone who thinks ‘outside the box’. It sends the message that when an opinion is popular enough, opposition will be stamped out at every turn. And while I understand that is how we advance ideals in our society, the irony of it being pushed by a group of leftists that seemingly spend hours complaining about ‘fairness’ is not lost on this writer.

If echo-chamber politics is the way we are going about progressing our society, than I wish our media moguls would at least be brave enough to admit it! They can gather up their activists and their fans while conservatives flock to their TV station of choice and we can just never discuss politics again. But if that is NOT what you want. If we want to instill the confidence in our youth to approach those with conflicting views and discuss positive and meaningful change than I urge those in control of how we get our information to please start including all the young survivors in Florida. Start hosting live broadcasts including all of them and then (if you’re in the audience), ask them questions. Don’t attack them. Don’t become angry. Remember that you are dealing with a young person who is dealing with more than you did at that age, and then THINK and consider why they feel the way they do. You might find it easier to change their mind that way.

So in closing let me just say this…

No one likes being silenced, especially the most vulnerable.