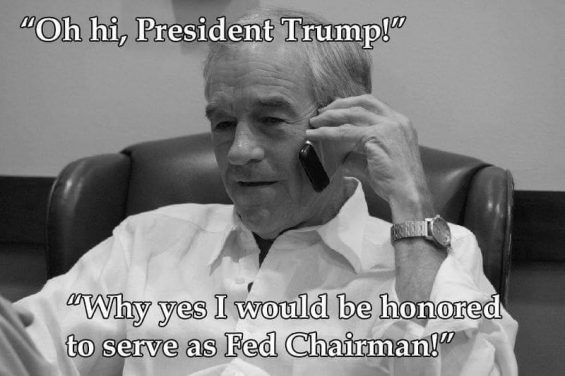 As President-Elect Trump begins the process of assembling his government many are already criticizing him for going against his biggest campaign promise of draining the swamp. He is bringing in long-time Washington insiders to partake in his transition process and names are being floated for his cabinet that comes from deep inside the swamp.

The only way he could rectify this whole situation is by appointing a key position like the chairman of the Federal Reserve with somebody that has been the biggest critic of centralized banking. One that could really drain the swamp of what we know to be the Federal Reserve.

The man for this job is easy, the one and only Ron Paul. The champion of the Audit the Fed and End the Fed movement in the United States. The hidden power of the United States rests with the Federal Reserve bank and too many people overlook the importance of that position.

Ron Paul has been schooled in Austrian Economics which is a school of economic thought that is based on the concept of methodological individualism – that social phenomena result from the motivations and actions of individuals. The concept of centralized banking does not bode well with the principles of the Austrian school of thought.

If President-Elect Trump really wants to be the President that fixes everything wrong with Washington D.C. then he must start with the Federal Reserve. It is the hidden engine that propels everything else wrong with politics in America and it needs to be stopped.

By picking Ron Paul for this position it would send a clear signal to many who despise him, including me, that he means business and is ready to change this country. However, it seems at the moment that he is the biggest con artist in the world and has suckered the stupid Republicans in believing that he will bring real change.