We have run stories in the past about the potential electoral success for Gary Johnson which includes an electoral college number as high as 161 electoral votes. But what is the best case scenario for the former Governor of New Mexico?

There is the high potential for Johnson to win a state or two and what does that mean for the American people as we get past November 8th?

According to our map (even though we think some of the red states will actually be blue which would put Clinton over the top in terms of the electoral count) we think that Gary Johnson has the real potential to capture at least 26 electoral votes. 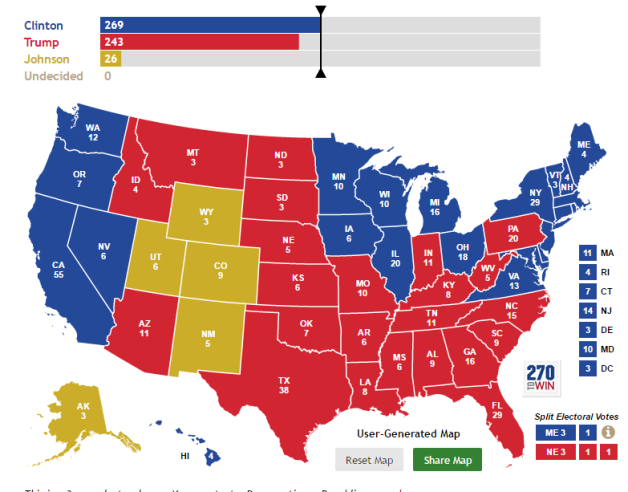 If this scenario plays out for Governor Johnson then the election will be thrown into the House of Representatives.

Disclaimer: There will still be people that will comment on this story saying that Hillary will win according to our map, but apparently they donâ€™t actually read the story or know anything about government. If no candidate Â achieves a majority of the electoral votes, and in this case, the majority is 270 then the election is decided by the House of Representatives.

The Johnson campaign has hinged one of their strategies on having the election go into the House. If it can make it there they feel they have a large chance of coming out with a victory. The Congress is not too keen on either Clinton or Trump and might defer to an experienced Governor as the voice of reason.

Even if the election doesnâ€™t get thrown to the House, or Johnson doesnâ€™t win there, it is still big news for the Libertarian Party. This scenario puts them on the map as a major party and the ability to shape the policy direction of this country for years to come.