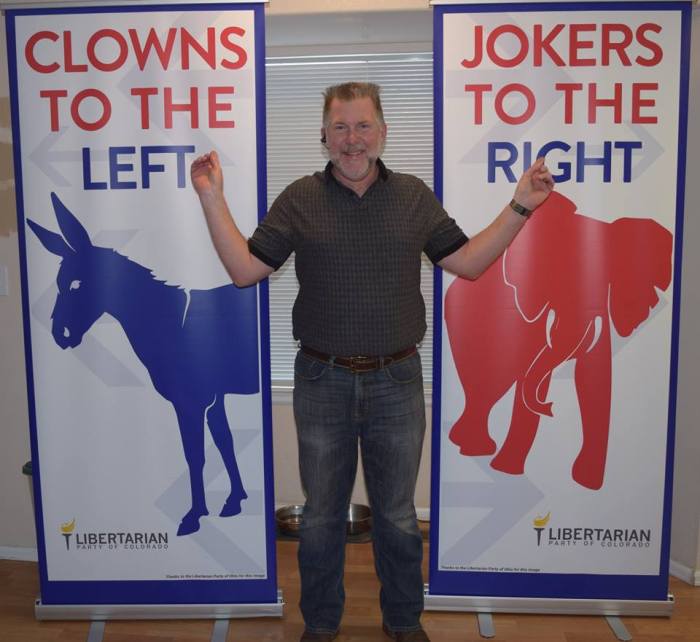 The 2016 Presidential election brought about big electoral changes that will last well into the next decade. With the choices, we experienced this past year many voters looked to different alternatives which included the Libertarian Party.

Here in the great state of Colorado Governor Gary Johnson pulled a lot of voters to the Libertarian side of the aisle, and now the movement in the state has a lot of work at hand.

This past weekend The Libertarian Party of Colorado had its yearly convention to conduct party business and elect new leaders for the state. While there was some board of director positions that were kept by the incumbent there was a few that changed hands.

One key position to change hands was State Chair. The position previously held by Jay North, who oversaw an expansion of membership and votes across the state is now in the hands of Wayne Harlos who was serving as vice-chair of the party.

From his bio on the state party website we learn a little about the new leader of the state:

Wayne is a native of Colorado and after being a Republican for many years, finally realized that no party other than the Libertarian Party stands for the freedoms that our country was founded on. Wayne is the Chair of the Douglas County Development Group with a goal of “spreading the word.” He has a significant passion for gaining liberty for the residents of the State. Wayne has been a Real Estate Broker for 30 years with the last 25 in Castle Rock where he now resides. “My goal is to reduce the size and effect of government in all of our lives.”

While this quick bio gives us some insight into the new state chair we took the time to ask Mr. Harlos some questions about his new position and how he plans to lead the Libertarian Party of Colorado over the next few years.

The following questions were asked of Mr. Harlos:

How will the success of the 2016 election provide an avenue to grow the Libertarian Party?

“The success of the 2016 election definitely exposed a few of our views to a tremendous amount of people, but I believe that we really need, at this time, is to tell the truth of what the Libertarian party really stands for. We have a tremendous opportunity, and we can’t let it get away!”

What are your goals for the Libertarian Party of Colorado over the course of the next couple of years?

“My goal, and I believe the goal of all the newly elected members is to grow the party through outreach events, helping to get local races won by Libertarian candidates, and spread the word through the efforts of our local volunteers. One of our biggest goals is to grow an army of people to help the board do its job. That is something that hasn’t happened in the past.”

Wayne Harlos is now poised to lead the great State of Colorado into 2017. With an ambitious agenda that looks to grow the Libertarian Party in our state, he is now in the position to affect real change here and around the country.