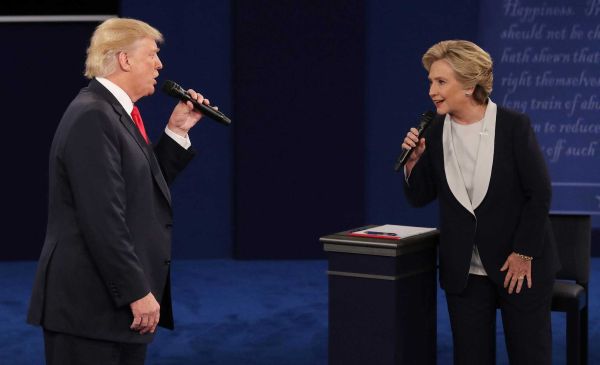 Despite what most people might think about the situation with Hillary Clinton and her emails, Donald Trump took it one step further last night that showcases his strong-arm fascist thinking.

Yes, Hillary Clinton probably broke the law when it comes to her email controversy, but despite that thinking, she was cleared by the Department of Justice in the matter.

However,  Donald Trump flirted with the idea of throwing his opponent in jail last night during the 2nd Presidential debate.

(CNN)Donald Trump on Sunday night issued a remarkable threat against Hillary Clinton, telling the Democratic presidential nominee he would seek to imprison her if he was elected next month.

“If I win, I am going to instruct my attorney general to get a special prosecutor to look into your (missing email) situation,” Trump said, “because there has never been so many lies, so much deception.”

Trump’s threat — which he has made before on the campaign trail — is extraordinary even by the standard of the vitriolic 2016 campaign.

Clinton responded first by calling Trump’s comments about her emails false, then said, “It’s just awfully good that someone with the temperament of Donald Trump is not in charge of the law in our country.”

Trump, as if continuing her sentence, added: “Because you’d be in jail.”

While many cheered last night in the debate hall and on social media they failed to miss the underlining picture of that statement.

For a Presidential candidate to threaten jail for their opponent, we are now in uncharted territory in this country. Fascists leaders across the world have done the exact same thing when it comes to their opponents. Never in American politics has a Presidential candidate made that type of threat to their opponent because we don’t live in that type of country. You can make the statement that Clinton should have been held accountable for her actions, but to say when you become President I will have you put in jail we are now living in a very different country.

History teaches us that the path to tyranny starts with statements and actions just like this. Again, while many might agree with this statement it is taking our country down a wrong path.