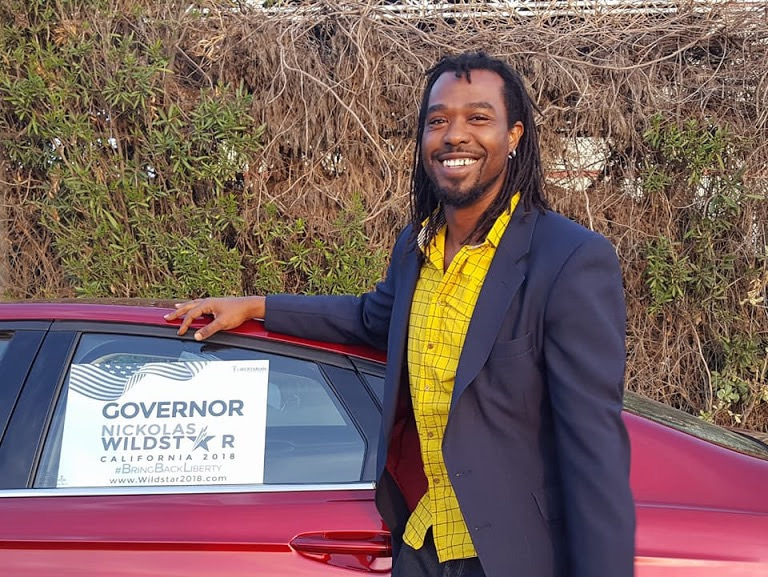 - California has a newly implemented top-two primary system, what are your thoughts on this system?

“I think the ‘Top 2’ primary rule is just another way for the 2 major parties to monopolize the voting process in the state and definitely should be repealed immediately. Between filing fees and promotional costs, running a campaign is already an expensive process and limits the number of candidates that voters actually get to choose from. Couple this in with another new law to make California a “Vote By Mail’ state and suddenly the amount of voters drop significantly. People barely get up to go to the polls anyway so it’s safe to say at this point that those who are in control would like to keep things that way by eliminating easier access for competition and rigging the system to only represent one dominant party.”

- Would you prefer a conventional open primary?

“Absolutely, but even more so what I would like is for any person that would like to run for office to be able to have ballot access and think a ‘rank choice’ voting system would be a better way for fair representation. This would get rid of the discriminating aspect of candidates needing to pay exorbitant fees just to be a representative of the people. Blockchain technology would also provide another option for people to participate in voting online and would be much simpler to use. Companies like ‘Follow My Vote’ have already created ready for use prototypes that are waiting to be utilized. The security provisions that government has put in place are supposedly to reduce voter fraud when really they are more ways to rob the citizens of their democratic right to choose their representatives. The electoral system certainly needs to be reformed in many ways and I would love to have the chance to put those changes in place as governor.”

- What do you think are some of the most significant problems California faces?

“One of the biggest problems without a doubt is the growing amount of debt. The state is currently looking at a deficit of $1.3 Trillion dollars which is mainly due to poor management of public funds by government officials. Gross negligence seems to go hand in hand with how state representatives wastefully spend California taxpayers money such as with the High-Speed Rail that still has not been built and by the time it does will be one of the most expensive and slowest trains of its kind. Misappropriation of public funds has also contributed to the increasing homeless population, failure of the public education system, declining healthcare treatment, and even sharp losses in homeowners property values. Each issue named comes with its own scandalous tale about how some crooked politician squandered away millions of dollars instead of wisely spending it on doing the things that they were hired to do and need to get done.”

- How would a Governor Wildstar go about fixing these problems?

“I really would like to make California affordable and make the Golden State gold again so it can continue to attract the best and brightest from all over the world! This must start first with bringing back some fiscal responsibility and accountability for elected officials, so to start, I plan to reduce all state employees salaries starting with my own. If someone wants to have a job making a six-figure salary they won’t be able to do so working for the state once I’m governor. Reducing spending by 25% within one year is another thing that I’d like to accomplish as well as reduce the state’s income tax and property tax to 0% along with leveling sales taxes statewide to just 7%. But first and foremost I want to have a completely independent and public audit of the state’s finances conducted so taxpayers actually know where their money has been going this whole time and so we know precisely where we can cut more taxes altogether.”

- Some residents feel that California should be split into two or three states, what is your opinion of such a proposal?

“The people demanding separation like the State of Jefferson patriots have very sound reasons as to why they would like to separate and they’re completely understandable. Lack of representation, over-regulation, extreme taxation, are all issues that affect everyone living in California. Those groups of citizens are just fed up enough to do something about it. I aim to remedy those concerns as governor but if I’m unable to smooth things over I would honor their demand to separate.”

- Would you support California seceding (Calexit) from the United States?

“I’m not at all an insurrectionist and would like to peacefully dissolve any residents discontent. The high costs of living, lack of employment opportunities, and level of hardship that people in the state are facing is only due to a matter of restrictive policies that would be reversed by me were I to be elected. However as an elected representative that will be elected to protect the people of this state any attempts to infringe the rights of the residents of California by the federal government will not be tolerated and will face prosecution for their insubordination. Were this to lead to further conflict with the federal government, which prompted the people of this state to demand secession, then I would honor the choice of my constituency.”

- The Libertarian Party of California will only be endorsing one candidate for Governor at the 2018 convention, do you think you will be receiving that endorsement?

“Absolutely! Or at least I certainly hope so I should say. So far I’ve gained endorsements from county affiliates such as San Bernardino, Kings, and Santa Clara which has the largest delegation of party members in the state. Also with there being very few candidates running for governor, as long as I can keep my momentum as the frontrunner then I believe I will be chosen as the nominee at the convention in April.”

- What is your perception of Zoltan Istvan, who is also looking to be endorsed by the Libertarian Party of California?

“I consider Zoltan to be a non-factor just as much as he does of me. He just wrote a recent article detailing how delusional I and other Libertarians are for believing that we will win elections which is funny to hear from a man who is running for governor himself and even toured around the country in a coffin-shaped tour bus as he ran for president. As a Libertarian, the only philosophy I promote is libertarianism which contradicts with Zoltan’s Transhumanism philosophy. He’s admitted to this conflict of interest himself so it’s a bit absurd to me how he calls himself a libertarian simply because he agrees with the principle of liberty. Both the Democrats and Republicans claim to adore liberty also but hardly support policies that protect, or respects every individual’s liberties so I think it’s very important that the Libertarians are clear on making this distinction by making sure that their representatives are only advocating the principle of liberty. It’s an identity that the party is still looking to solidify and unless it is defined specifically will get lost in definition by those wanting to sneak in under the big tent and claim that they belong.”

- What was your personal experience that lead you to Libertarianism?

“I was always a little L libertarian and just didn’t know it until I discovered Dr. Ron Paul around 2010. During that time in my life, I started to get very involved with the community as a political activist and had been part of many demonstrations like against police brutality, occupational wars, climate issues and more. These acts of civil disobedience quickly became known as the Occupy Movement which was a string of coordinated sit-in protests all over the world to bring to light many of these issues. It was a great educational experience where I learned many things, one of which was about the call to End the Federal Reserve which was prompted by rallies around Dr. Paul. After hearing him speak about fiat currency, private property rights, and individuals authority to govern themselves I was sold on liberty and had finally found my voice politically.”

- If there was one thing that you would want the electorate to know about Nickolas Wildstar what would that be?

“I’d want them to know that I am no different than them. Time and time again We The People have selected elitists to represent us in government who claim to know better than us and even entertain the ones who come along vying for the spot making such statements. They have no interest in being a servant of the public but rather would like to dictate the behavior of others according to their ideology. I’m not a multi-millionaire, I’m not an ivy league scholar, I’m not a career politician and even if I were wouldn’t make me better at serving as governor for the people. History is proof that the politicians of the past that have had all of these things have done no better than those who take the position simply because they would like to help the people of their neighborhoods and better the living situation of those in their community. The way government operates is not only unconstitutional but it is unproductive for a society that is constantly growing, innovating, evolving and learning. Supporting a new face like mine is a chance for a fresh start and as the first Libertarian governor of any state I will make sure that California will be that bright and shining example of what liberty and justice for all truly looks like when living in a free country. Vote Libertarian to ‘Bring Back Liberty’ and choose me to compete as the next governor of California on June 5th 2018. Visit my website www.Wildstar2018.com and join me on the frontlines in the fight for freedom!”

You can donate to Mr.Wildstar’s campaign below

**Editorial Note**  Zoltan Istvan is not seeking to be endorsed by the Libertarian Party of California.