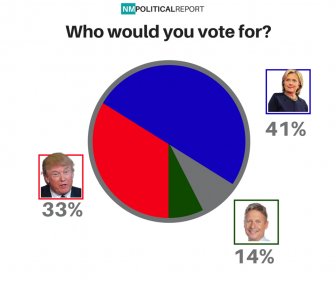 A new poll conducted by Public Policy Polling broke down a three way race between Hillary Clinton, Donald Trump, and Gary Johnson in the swing state of New Mexico.

The poll, conducted this weekend, found that Clinton leads in a three-way race with 41 percent of the support of likely New Mexico voters. Trump would come in second with 33 percent and Johnson would receive 14 percent of support. Johnson is a former two-term New Mexico governor.

This is incredible for the Libertarian Party and Gary Johnson.  We are now starting to see the widespread support that a third party could potentially receive in this election.  Many will try to argue that 14% is not a lot, but consider that 4 years ago Johnson only attained 1% of the vote nationally, and with the state of this election it is proof that people are crying for an alternative.

The former Governor of the state is also receiving high numbers from both minorities and whites:

Gary Johnson is the credible choice for the Libertarian Party, and even though there is a challenge to his candidacy, these polls prove his viability. He has the name recognition and the appeal to many voters across this country and nominating him will do great things for the Libertarian movement across the United States.