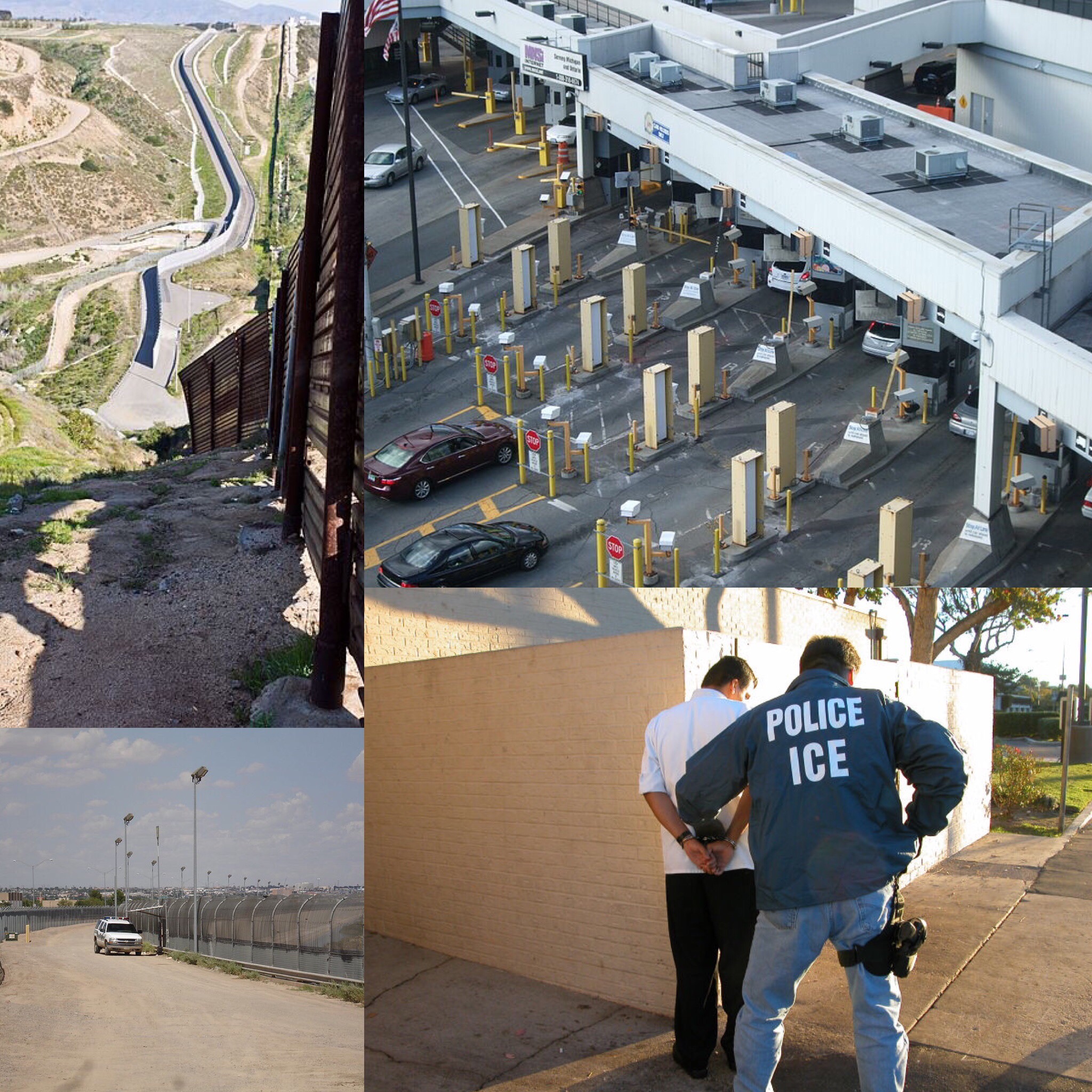 Seldom (if ever) do I debate a member of “ the right” ( I’ll explain why I put that in quotations in just a second folks ) without hearing “ you libertarians need to drop that open borders nonsense “.

It’s not always said exactly that way. But it is always some facsimile of that very sentiment. But there are a great many fallacies with that very misguided thought.

One, there are MORE than enough closed borders libertarians. They will argue that defending the border is, in fact, a form of national defense and that is one of the few areas where the federal government indeed should be involved. I am not 100% on board with that idea, but also cannot completely argue against it.

Two, there is a big difference between being “ open borders “ and wanting to allow a greater degree of cross-border trade and making the naturalization process towards citizenship easier.

Three ( and this is perhaps MOST important ), there is NO libertarian worthy of the term that would advocate that anyone, much less a non-citizen, be on taxpayer funded welfare ( which is a huge attraction to those trying to escape poverty ).

Now before I continue, I want to backtrack and explain why I put my reference to the right in quotations. I did so because, in truth, the only real “right-wing” of American politics is, in fact, the liberty movement. There are more than enough “conservatives” (no idea what they are conserving ) that love state intervention in markets, as long as it is a market they like, approve of or are invested in. Going to the left in politics is always an appeal towards the validity of the state. Even the so called “right-wing” Nazi Party used the word socialist in their official party name. Yet they are still considered an extreme right-wing ideology because political terms in America have all been bastardized (for the most part ). But now that I explained that let us get back on track.

I avoid this debate (closed versus open borders) altogether and instead redirect the conversation back towards the foundation of libertarianism.That would be free-markets, property rights, and minimal government.

Let us first start with free markets ( something I brought up in the third paragraph ). If you live on one side of an otherwise imaginary line and possess goods I wish to buy and you, in turn, wish to sell me those goods, then I do not see why there should be special taxes or fees to moving those goods across said imaginary line. That just sounds absurd. Both economies are better for the transaction and two free individuals made out good for the day. That’s good! We should promote that, not hinder it.

What is even worse is that we tax OURSELVES in this ridiculous scenario. We tax ourselves for exports and then (often ) get taxed again by the country we are shipping our goods to. That is downright INSANE! Even worse is that it has given rise to our current political climate in which we are focusing on protectionist laws for labor markets that have little real chance of coming back to America. Why do I say that you ask? Because Americans are increasingly looking for new and more modern forms of making money (like a cook who decides to become a writer because it seems like a better way to make money than cooking ). Those that ARE looking for the manufacturing jobs are often doing so because it is one of only a few skills they possess and they NEED a paycheck. This is often due to having a family or other responsibilities and that in turn complicates the problem further.

These American’s NEED a certain amount of money to even get by, let alone live comfortably. This increases payroll on top of other overhead expenses and before you know it we have American companies laying people off and shipping that work overseas. This also gives rise to politicians advocating a minimum wage, further diminishing a productive worker of the ability to negotiate his own wage. But let us look at another market …. Agriculture!

People need food (all people) so at first glance, it seems like a good field (pardon the pun ) to go into … right ?

WRONG ! I am from a farming town and let me assure you, that kind of work SUCKS! You will come home tired, smelly and dirty EVERY DAMN DAY! With the exception of multi-generational farm families, most will only take this job as a last resort … which is just the case for the many migrant workers that are currently filling these jobs. They (like the overseas manufacturing workers I mentioned above ) will take a lower rate and often bust out harder days work than their American counterparts. (again, I am from a farming community … I’ve seen these guys out in the fields and they are BUSTING IT OUT !!!)

You can not logically expect a man to pay an American $15 for what someone else will do for $8, that is just stupid. Scream words like “ patriotism “ and phrases like “ Make America Great Again “ until you are blue in the face … as a friend of a business owner I am siding with the other business owners.

The other problem we are facing here has two sides to it. In the first, the smaller farms are now paying illegal immigrants under the table for this work (and keeping the local Americans from being able to obtain those jobs as a result ) so they can try and compete with the larger farms. But this doesn’t work either because the larger farms are getting the legal migrant workers here on visas (usually legal anyway) and paying them with money that often comes from the agriculture subsidies (otherwise known as our tax dollars ).

And yes folks, that is how the agriculture subsidies in this country work. They go to the top 1% of farms. Our tax dollars, directly into the pockets of men who are already rich and doing fine and along with it, non-American workers.

That is what happens when you create a welfare state off the money of those working hardest, it always attracts either the least productive people or in this case, the citizens of other lands coming to exploit it.

The fact is, subsidies (all subsidies ) are rewards for failure. It only benefits the business owner who either has a failed business model or (in the case of the crony capitalist ) has cashed in on a rigged system.

The fact is, taxing ourselves to death (often to fund those subsidies ) just leads to our labor being shipped to places where it can be obtained at a cheaper cost to the business owner.

So now let us take a look at the second piece of the libertarian-immigration discussion … property rights!

In a day and age where we can all agree our tax code is terrible (regardless of your political affiliation ), I can not for the life of me figure out why anyone (even a Trump supporter) wants our tax dollars paying for a giant wall.

What is worse, they (Trump supporters ) seemingly laud the idea that this wall will actually be behind the actual border to maintain a number of security measures … my question is, how does that effect land owners whos land borders Mexico (or Canada for that matter )?

The answer is quite simple, eminent domain!

Not withstanding that President Trump has already expressed his love of this statist practice how can anyone calling themselves a defender of property rights support this? They are literally supporting the act of taking something that doesn’t belong to the government without the property owners consent. This is wrong and contrary to everything freedom is about. Defending it because the government is paying them is no excuse either. If I take your home and burn it down for my own purposes without your permission, it probably will not matter whether I paid you or not.

Property rights are FUNDAMENTAL to a citizens success in life. If you own nothing, you essentially are nothing (at least of any value ).

This brings me to my final point, minimal government.

The border problems (whatever they may be ) in Texas are going to be very different than the border problems in Washington state. So why should we be advocating the federal government have anything to do with this when Texas and Washington probably have two very distinct sets of issues to be dealt with?

Wouldn’t it be much simpler to cut taxes across the board and free up money so that states can fund this themselves?

Even better, this could allow individual towns, cities, and municipalities to more directly attack this problem. I would think the border town probably has the BEST idea of what do and how bad the situation is. We could minimize it further by making this the responsibility of land owners who’s land borders Mexico or Canada, but baby steps folks.

And of course, freeing up tax money (at any level) means that businesses and their workers (ideally in scenario American workers ) also have more money to pour into the economy and job growth.

So it is in this spirit that this particular libertarian is not “ open borders “ or “ closed borders “. I am a small government, power to the people, anti-death tax, anti-bail out, anti-subsidy and pro-property rights libertarian.

I want to end a system that quite literally attracts people to come here the wrong way. I want them to come here the same way I want someone to walk into my church. I want the pull of what is inside to make them want to change for the better and come here to be better . I admittedly want the process that facilitates that to be easier but that is another discussion for another time.

The question you now need to ask yourself is, what is your immigration stance and is it a stance that promotes freedom for all, or just convenient for you?