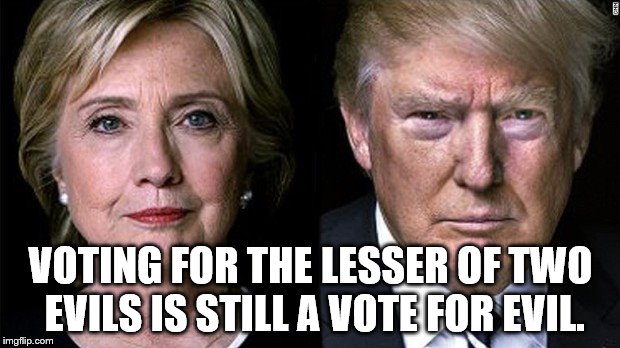 Every 4 years we are we are presented with a choice for President that usually makes us cringe and beat our heads against a wall because we can’t stomach the prospect of voting for evil one and evil two. Every 4 years voters in this country plug their nose, cringe their face, and vote for the lesser of two evils.  They then walk out of the voting booth feeling like they just sacrificed their entire soul to cast that vote.

My question is why? Why subject yourself to the prospect of going against everything you believe in and voting for somebody that makes your stomach turn?

The argument that these people make is that they have no other choice and that if they don’t vote for that candidate than the other person will win. They abandon all principle and conscience and cast their votes out of fear. Every 4 years that story gets told by many people in this country and then those same people question the motives of voters that decide to vote third party in order to avoid the sickness.

What if I were to tell you that voting for the lesser of two evils shows a lack of conviction?

Principle matters the most. Conviction in your actions defines a person’s character and every 4 years that character is called into question by many people in this country. They abandon everything they believe in because of peer pressure and this false hope that they are saving the country from the other evil.

2016 is no different.  We have two of the evilest people running for President on the Republican and Democratic tickets and already millions of people are abandoning all of their principles and convictions under this false pretense that they will save the country by making sure the other candidate doesn’t get elected.

We keep falling further and further into this empty pit every 4 years by sacrificing every held belief that we have by voting for the lesser of two evils.  Some might say that years of voting this way has lead to the two major choices running for President.

There is a way out of this mess and all it takes is a re-hash of mindset and the ability to stand your ground and vote with some conviction.

For the people across this country that say voting for a third party is a wasted vote, this message is for you. Voting for a third party shows principle, it shows character, and above all, it shows a love for your country. The people who vote for a third party care deeply about this country and will do anything to make sure that it doesn’t fall into the hands of some of the most authoritarian leaders we have seen in the history of the United States. Third party voters are the buffer between absolute freedom and tyranny. If you want to keep voting for tyranny and jeopardize your way of life then that is your prerogative. Us “third party” types will be the ones on the front line of liberty and freedom making sure that your ignorance is still protected by the Bill of Rights and the Constitution.