The Federal Government Needs To Get Out of the Education Business 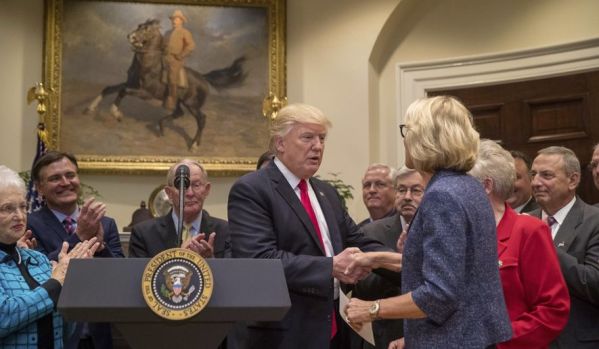 President Trump signed an executive order this past Wednesday that starts the process of pulling back the federal government’s control over K-12 education in the United States.

From the Washington Times:

President Trump signed an executive order Wednesday to start pulling the federal government out of K-12 education, following through on a campaign promise to return school control to state and local officials.

The order, dubbed the “Education Federalism Executive Order,” will launch a 300-day review of Obama-era regulations and guidance for school districts and directs Education Secretary Betsy DeVos to modify or repeal measures she deems an overreach by the federal government.

“For too long the government has imposed its will on state and local governments. The result has been education that spends more and achieves far, far, far less,” Mr. Trump said. “My administration has been working to reverse this federal power grab and give power back to families, cities [and] states — give power back to localities.”

This is one of those moments that I wholeheartedly agree with President Trump. The federal controls over education have caused more problems in our schools then fixes. The mandatory testing that has consumed the school year is destroying any real learning opportunities for students in this country. Teachers are teaching to the test and not trying to advance their students knowledge with reading and writing skills.

I do have one point of contention with the President. He needs to not push these types of reforms with executive orders. His ability to yield power is getting out of control at this point and he is by stepping Congress almost every day.

What really needs to be done at the national level is new legislation that will remove the federal government’s ability to govern the education system. The first and only step is the elimination of the Department of Education and allowing the states to have the control over how they educate their children. Localities and districts know what is best for their students and teachers and not the political heads in Washington.

I teach is a low-income high minority school district in Colorado. We were on the cutting edge of new reforms before Colorado and Washington were. We held our teachers accountable for their teaching and hold them to high standards for their performance and data that no other school district was doing. We didn’t need the federal government to tell us how and when to do this. We implemented this program ourselves at the direction of our local school board and district leaders.

That is the type of education reform we need in this country and it doesn’t start with Washington. It starts with our kids and our teachers and not with Congress.