Suicide, Accountability and the First Amendment: The Tragic Case of Conrad Roy and Michelle Carter 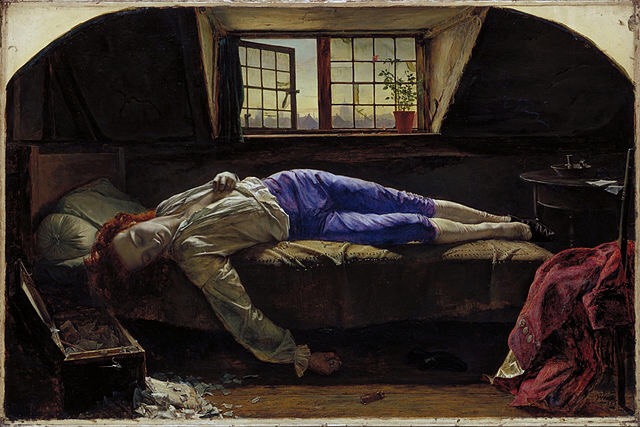 “The Death of Chatterton” by Henry Wallis, depicting the death of Thomas Chatterton, another suicidal youth. Part of the Public Domain.

As I sat on the edge of my bed getting ready to watch Gran Torino on my old school PlayStation 2, I decided to check my Twitter one last time. Immediately I noticed there was a lot of tweets about the so-called “texting suicide case”. If you have not heard about this, let me bring you up to speed.

20-year-old Conrad Roy was in a long distance, on-and-off relationship with 17-year-old Michelle Carter at the time of his tragic death. Both Roy and Carter had struggled with issues such as depression for much of their adolescence.

While it is unclear exactly what led to Roy’s final emotional collapse we do know that he contacted Carter on Sunday, July 14th, 2014 where he either contemplated or outright threatened suicide.

It appears at first that Carter either tried to talk him out of it or was dismissive, possibly not believing him. Eventually, she began to actually encourage Roy to go through with the suicide, which he unfortunately did. Michelle Carter was found guilty of involuntary manslaughter and sentenced to 2.5 years in prison (though only required to serve 15 months) yesterday, August 3rd, 2017.

That is obviously a vague recap but that is because I only wish to cover the basics. What I have just written is NOT why I started writing this piece. I am writing it because of the very real, very DANGEROUS precedent it sets now that Miss Carter has been convicted.

We pride ourselves on our freedom here in America. It’s the foundation of the very idea of American exceptionalism. When we specifically discuss our 1st Amendment rights, a popular defense of unfettered free speech is that we must defend all speech, not just the speech that is popular.

There is nothing more UNPOPULAR than a youth taking his own life while in grips of mental illness or emotional distress. It is heartbreaking and terrible. To know that a youth such as Carter could either be so emotionally unstable or simply cold and callous such as to suggest suicide to such a troubled young man shakes this writer to his very core.

But she should not be in a jail cell for this.

As libertarians, we cherish values like personal responsibility and accountability. But if you think this girl should be in jail because a disturbed young man decided to take his own life, you might want to re-think where you are coming from on this. Is it your belief in freedom, or your emotions getting the best of you?

As I gazed upon the pictures of this young woman crying once she learned of her fate, I remembered my own arrest. I remembered the feeling. The feeling of fear as they took me out of my mother’s house. My puppy looking at me bewildered and frightened (she now fears police officers as a result). Knowing I could do 15 years for a crime I did not even commit.

And a few months into this nightmare, I remember contemplating suicide… something I had NEVER considered in my life.

Long story short, my innocence was eventually proven. I was lucky. I was lucky because ONE day in a cell while I awaited my arraignment changed me forever. I literally amended my whole life style to all but guarantee that I would never suffer that again. I was also a 30-year-old man, not an emotionally disturbed teenage girl.

Young Michelle Carter is disturbed. That is of course, just my opinion. I am not a psychologist. But I know that if ONE single day in a holding cell changed me, 15 months around much more hardened criminals could very well change Miss Carter as well, and quite possibly NOT for the better.

I have seen the effects time on the inside can have a person. Most of my friends have done at least a night in lock-up. Some, have served at least a few months. A few, have done serious time. It changes you. It is a frightening experience, to say the least.

And I am by no means saying that criminals don’t deserve that experience. What I am saying is that while this might have been an isolated incident where (upon receiving treatment) she could fully recover and become a productive member of society, she might now just become worse. Despondent, misanthropic and utterly joyless at the prospects that now await her as a convicted felon, we might have created the very criminal our justice system is meant to rehabilitate.

In closing, I want to revisit the precedent this sets. We can not allow emotionally unstable people to dictate the course of the discussion regarding our freedoms. It is by far, the biggest slap in the face to responsible people everywhere who check their emotions at the door. We are quickly becoming a society of “my feelings” rather than having a logical discussion about truth, consequences and ultimately accountability.

As a writer, I get criticism with EVERY piece I pen and publish. I am there, responding to my critics. The age of social media and the Internet affords us (writers) this opportunity. When Norman Mailer responded to his critics, he would have to write a piece, send it to a newspaper and then wait until the next day to see it in print. I am glad that is no longer the case. While usually, this is a semi-civil discussion, sometimes it gets ugly. It’s the nature of the beast and I accept that. What I will never accept is that when it finally devolves into ugly, vitriolic garbage that I will not be able to tell this hypothetical critic to take a flying leap without the fear that I might go to jail if he/she kills him/herself.

I hope my fellow writers, as well as all Americans, feel the say way.